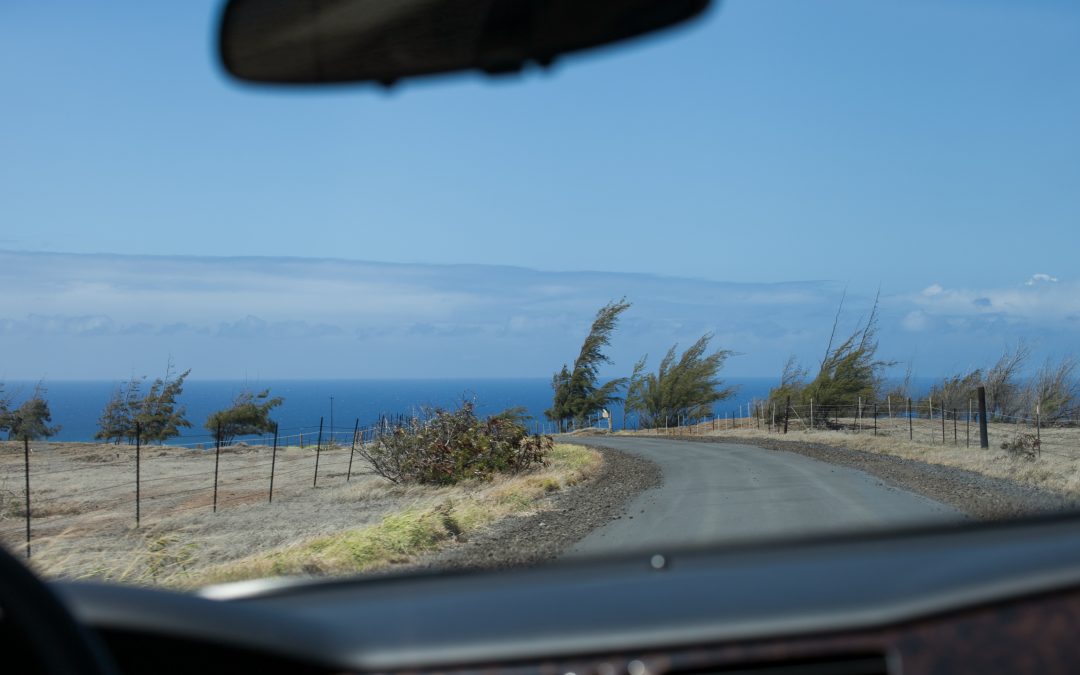 As we drive south from Volcanoes National Park along Route 11, there is an entirely different feel. The most southern point in the United States is a lonely place. It is a beautiful drive along the flanks of Mauna Loa, the largest shield volcano on earth. There is a subdued quality to the atmosphere unlike the verdant forests of the northern belt or even the cracked, black lava fields of the western belt. The land seems more quiet as you drive down long swathes of “steps” towards the ocean. It is a comfortable loneliness in the least populated area of the Big Island.

As an East Coast guy, used to multi lane highways, steel forests and a crush of people, it is difficult to write about the southern end of the Big Island. The entire Big Island is so foreign to my normal world, it is like driving into a bubble of space that exists outside of reality. The southern end of the island is like a bubble within a bubble. So it is fitting that the first stop is an opposite reflection of what I am used to: a black sand beach.

I have to put my geological geek badge on for just a moment. The beaches I grew up on (and chased off by the cops) in New Jersey and Florida were like Hapuna and most beaches in the world: white sand. They are organic in origin, crushed up shells and coral. They are replenish able. In Jersey, you even see huge rigs off the coast pumping sand up from the ocean floor to prepare for tourist season. Black sand beaches, though, are inorganic and non-replenishable, which makes them rare. You won’t find them outside of “newer” islands.

There are two kinds of black sand beaches. The black sand beach at Pololu? That kind is created by lava rocks being chipped away by coursing water like the river in Pololu Valley. They can be course, crunchy. Then there are beaches like Punalu’u, called “genuine black sand beaches,” created when a certain kind of lava flow (‘a’a) meets the ocean, solidifies, and then is pulverized by the waves, creating a very fine sand—my feet immediately sunk in up to my ankles as soon as I stepped onto it. Most genuine black sand beaches are quickly washed away which, to me, makes them even more special.

Any first time trip to the Big Island has to include a stop at Punalu’u, the most accessible black sand beach on the island. It is a big tourist attraction, and is also a meeting place for the locals, so the parking lot tends to be full. As soon as you see that black crescent winding away in front of you, the drive and trying to find someplace to park will be worth it. Swimming is allowed, but I wouldn’t put on your trunks just yet. It’s cold (cold fresh water springs feed the bay) and it can be rainy (you are still on the wet side of the island).

If you walk the beach, you might find another local. Sea turtles (honu) are making a comeback from when they were almost hunted to extinction and they love this place. Tracy was telling me that she never saw honu when she lived here. On one of my visits, it was a sunny day and four honu were sunning themselves on the black sand. As I watched (well, gawked with the rest of the tourists), a fifth made its way up through the waves and boulders to join his buddies.

The cold water of the bay kept me out of it, so as the ladies spread out towels and assumed positions much like the honu to take a nap, I went for a walk. Out and away from the black sand beach are black lava shelves pocked with tide pools, perfect for a non-beach person to explore. 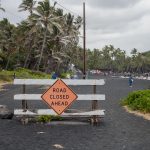 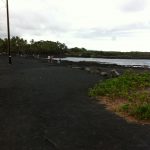 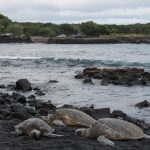 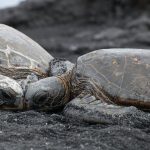 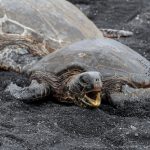 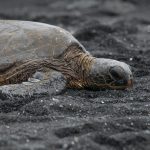 About 15 miles south of Punalu’u is Na’alehu, the real southernmost town in the United States. Yes, Key West’ers, we’re about 500 miles south of you–so you can shake a stick at that. Even if you’re not hungry, you have to stop for pie. It is the best pie you’ll ever have, at the aptly described southernmost restaurant in the United States, Hana Hou Cafe.

After pie–and Kona coffee of course–we’ll now be driving west—Route 11 takes a hard turn at Na’alehu. In about five miles, there is the entrance to my favorite place on the Big Island: South Point Road.

South Point Road is different. All of the highways on the Big Island have a relaxed feel, that “so not Philadelphia or anyplace like it feel.” The comfortable loneliness of this area gets pushed to an almost surreal otherworldly point. You are driving to the southernmost (tired of that word yet?) point in the United States, down a relatively thin stretch of land, with constant winds that carry the ocean with them. The road—well paved–is barely wide enough for two cars, with some blind hills and one lane bridges. It sort of reminded me of some roads in Britain, made exclusively for minis.

As you get closer to South Point, wind farms begin framing the landscape. All that is really here is wind and horses. I’ve never seen anything quite like it. The ocean is hidden from you behind low hills, but you know it is there. Herds of horses surround you and thin almost fragile seeming windmills stretch towards a cloudy sky. You are driving towards the end of the world. Again. In eight miles, you are there.

I really enjoyed South Point. As an “attraction,” it does not have much to say for itself, just another piece of land, with tall cliffs, jutting out into shades of blue with gusty winds pulling and pushing you. It has a nice little parking and picnic area, and there will be people diving off the cliffs to climb back up a metal ladder. The thing I enjoyed most about South Point is the perspective.

Think about it. For all that the Big Island is a massive island, it is really just a tiny spec of land in a vast ocean. If you were to dive off this point and swim south, the first thing that you would hit would be Antarctica, 7,500 miles away. I actually looked it up on a map. If you veered a little left or right, you might hit the Cook Islands or French Polynesia. Due south, though, across half the globe, there is nothing waiting for you but the polar bear club. The immensity of it just wraps me up. 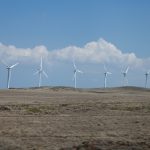 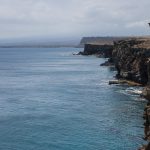 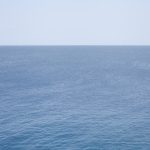 If you travel up South Point Road a little way and hang a right, you’ll be on the access road to the Green Sand Beach. Hands down, this was my favorite. Getting there, however, is an adventure in itself.

The first part of the access road is paved, but trouble starts when you get to the parking lot, though calling it a “parking lot” is a bit ambitious. I saw one guy bottom out his rental on a slab of concrete. Bye, bye oil pan; hello major expense.

Bring cash. The green sand beach is about 2 ½ miles away. It can be hiked, and it’s completely free. But it is a grueling five miles. Guidebooks say it is a “deeply rutted” road. That is sort of like calling the Arctic Ocean a “bit chilly.” Some of the ruts are deeper than cars. If a couple of tank divisions had a rugby match in a torrential rain…that gets closer to what it is like.

And it is not a Hawaiian hike. There are no tropical rainforests, no black cracked stone desert, and nothing that I would consider even remotely scenic (many may disagree). It is a red dirt landscape with a constant wind, and dust, and no true marked path. Coves dot the coast. You might not even find the green sand beach.

That’s where the cash comes in. Locals will bring you and your party in their 4×4’s and pick-ups for $15-20 per person. Our guide reminded me of a Hawaiian version of Cheech, and he had my mother-in-law laughing in the cab the whole way there and back. The ride was even fun, diving through valleys, clambering up steep inclines, until we pulled into a parking area where rolled “cigarettes” were being passed around with the other drivers.

Geology time. There are only a handful of known green sand beaches in the world, this one, one on the Galapagos Islands, one in Guam, one in Norway, and possibly one on the Baltic Sea. The sand gets its color from the semi-precious stone olivine, crushed up into a fine sand. It is disgorged from a volcano under an incredible amount of pressure to build up along the edge. But here we are. Yep, you’re about to go swimming in the crater of a volcano.

The sheer walls are cut with steps that bring you to a narrow crescent of fine green sand. The south side of the cone has fallen out to allow the ocean in and the waves were perfect for a swim. Some guide books talk about how dangerous it is, but others say as long as you stay in the bay, and the surf isn’t high, you should be okay. We were, and it was wonderful. We could feel a pull outward, but the next wave just slapped us back in.

If Cheech hadn’t been waiting on us, I probably would have stayed longer and explored the high cliffs that frame the eastern edge of the beach. Tara and I climbed up, but not as far out as I wanted to go.

The view takes your breath away quicker than the wind. 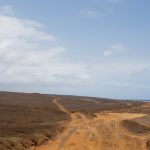 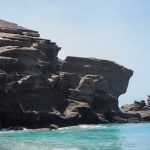 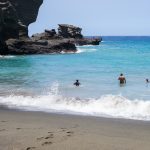 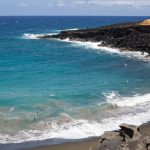 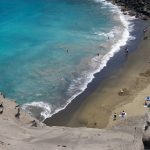 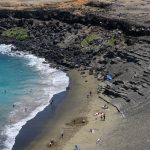 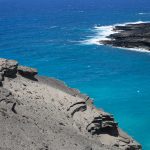 And that ends part 5. In part 6, we’ll be closing the circuit—but not finishing the tour. We’ll immerse ourselves in history, make a pilgrimage to the coffee captial of the world, and be blatant, unabashed tourists.