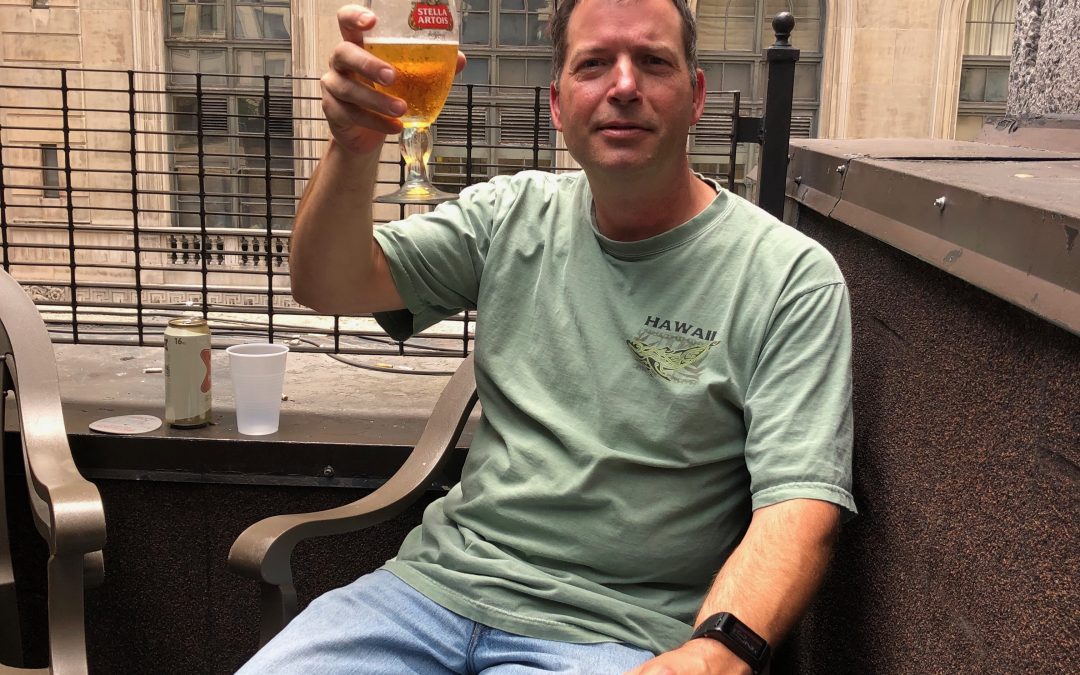 Let’s talk Chicago! I’m not there. I’m not even going close. The ride to Peoria from St. Louis was close enough. I absolutely love Chicago in the summertime. I’ve been there mid winter. Who the hell holds a conference in Chicago in the middle of winter? But I was reminded on my drive why I am not going there. The winds were whipping cars and trucks around on the road. How does an Illinois police officer even know if someone is swerving under the influence or just getting their butt kicked by the winds?

Chicago might not be the epicenter of the winds, but isn’t called the Windy City for nothing. So, no, I’ll visit the nice little city called Peoria. I am not quite sure what brought me here. A spot on the map? Or some dim memory of long ago that brought me searching for something? The memory has faded but I am here for the night anyway.

July 2, 2019: waking up in Chicago. I was staying at the Virgin Hotel, sitting on a pair of lips, sipping coffee, attempting to wake up, watching the already awake people rushing about their day. I think it marked my first non business solo trip in…forever? It was definitely a turning point for me. 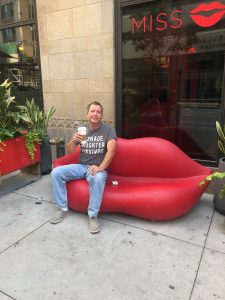 “Why should I help out a failing business,” my so called best friend and life partner told me a few months before. Right after she took two vacations, one with her mother and one with her daughter.  That was right after I had to put my cat down, alone in the room. My best friend for 18 years. When things got hardest, and I hit my loneliest points, Pretty would jump into my lap and I could whisper to her, stealing a line from “For the Love of the Game,” “It’s you and me. Just you and me.” And then it was only me. The ride home was awful and I am lucky is was a short drive. I couldn’t see. My eyes had swelled shut and I had snot running freely down my face. Waves of pain and despair washing over me, crushing out more and more sobs and tears. Yes, for a cat. I have no problem with that. She was my best friend.

So I took a test run to Chicago. Everybody thought I was nuts. Alone? Yeah. Why? To see a concert of a little know alternative band in the House of Blues, something I had always wanted to do. The X Ambassadors. It was one of the first new bands that taught me all new music doesn’t suck. A friend from home, Andrew, even hooked me up with VIP passes, a meet and greet with the band and an hour in the in the room alone. But I wasn’t alone.

One of my favorite stories of the trip was Edward. He’s the one who took the picture of me toasting the Blues Brothers in a town that nobody remembered them. But we got to talking. He was from South Africa, traveling the states. When I gave him the short reason why I was there, he popped out of his chair. “The X Ambassadors are my favorite band!” –he was a young guy. I dimly remembered being that young. He jumped immediately on his phone. “I got a ticket!  I had no idea they were here and I got a ticket to see my favorite band!”

I strolled along the river in Chicago on a warm summer day with light breezes coming off the lake. I went to check out a friend’s jewelry in the museum, only to find out it wasn’t installed yet. A pang when I saw in my hotel room a bottle of her favorite bourbon, Builiett. Yeah, it would be nice to have company. But I needed to learn how to be comfortable in my own skin and she wasn’t having none of it.

I got to the House of Blues to find out I had two VIP passes waiting for me. I called Edward. “Get here. Fast. Do you want to meet your favorite band? Doors close at 6:30 sharp and I am not missing the opportunity.” 15 minutes later, a chubby guy was running as fast as he could up the hill to the place. 10 minutes to spare.

What the hell was I doing there? I was easily the oldest person there. But I did get to tell the band that they were one of the first bands that taught an old man all new music doesn’t suck–just most of it. They laughed and we chatted.

Edward and I wandered the room. A couple of ladies we had met standing in line bought us drinks. Not in “that” way, just a hello. Then, we took our places in front of the stage. After a few beers, I was about to head to my balcony seat. I hate crowds.

“No,” Edward said. “Look, you just gave me a gift. Let me return it in small part. You’re looking at this the wrong way. Yes, we got to meet the band and wander around, but this is the real prize. Front row. Look at where we are standing. Look at how other people are not crowding together like in a mash pit. We all give each other space and respect that space for beer runs. Trust me?”

I did. Then I found the two young ladies standing next to us, with one more than willing to share her vape. I was ready for the concert, trying to settle into myself, into the present, into my skin. It was a struggle, but I was finding a balance. The beers helped. The sweetness, selfless charity and just absolute wonderfulness of Edward and the two young ladies was helping. And then the concert started.

Damn what a show! Edward had been right. Front row. And they were fantastic, playing all of the songs I knew and I few I didn’t. And then they got into their new album. I knew there was going to be trouble.

The one song came on that I was hoping they would play but was also hoping they wouldn’t play. See, one of the things I enjoyed about the band was the lyrics. They spoke to me in ways that made me look at things differently, almost like a friend who understood. When “Hold me Down” came on, I knew I was alone in a crowded auditorium. Completely alone.

A weakness of mine. A terrible cancer that had eaten away my soul throughout my life, was, and is, loneliness. When I felt on the verge of flying apart, all I ever wanted was to feel like someone was there to “hold me down,” until the waves of darkness passed and i returned to being the cocky, powerful, SW Philly, Infantry SOB who could take on anything life threw at him. Just for a while. A little while.

I do love the song and they did it great. It passed and I was surrounded again, being passed the vape and handed another beer.

When the concert was over, I walked away. A big weakness in my life is not walking away when it was time, past time. I don’t know what Edward was doing. Or the ladies. But I walked into the balmy Chicago evening. Late at night, I paid heavily for an excellent bone in rib eye that was worth every penny and then walked a mile or two to the last and only smoking bar in Chicago.

I need to teach myself how to hold myself down. I’m getting there. This current journey is teaching me tools. I have yet to decide where I will out those tools into practice. It won’t be Chicago, as much as I love the place.

And there was Regina in Chicago, an old friend from college who asks the most excellent of questions. We met for drinks and a snack on teh rooftop bar.

I know the answer.

But that can wait. All the drunks from the marriage party are passed out and I can get some sleep.