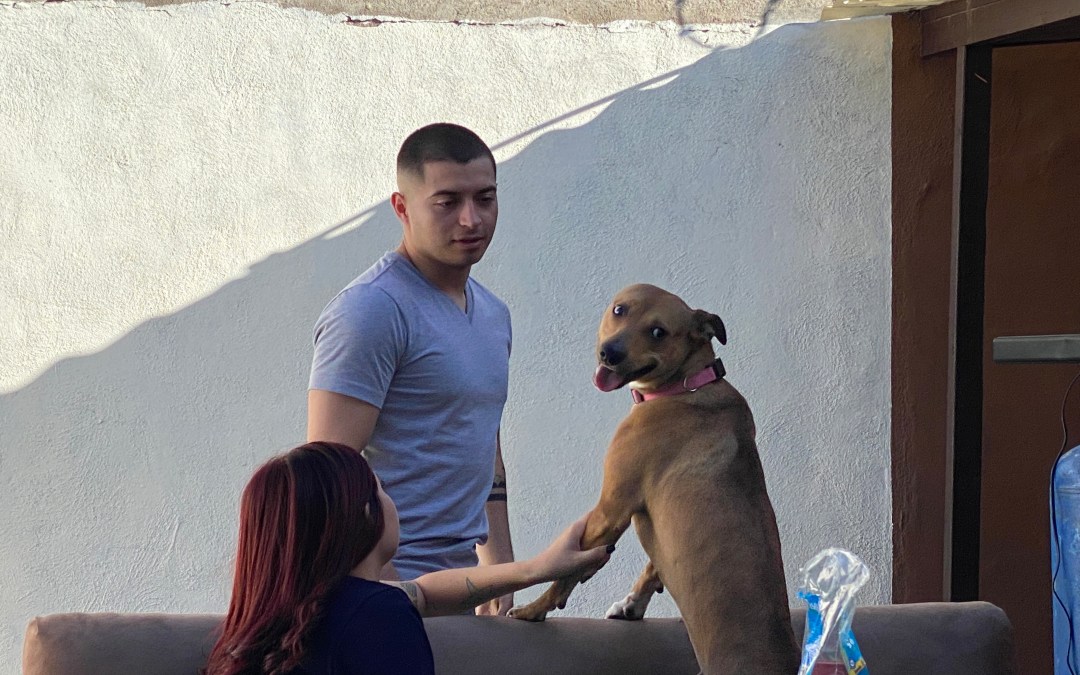 Or this might be a part of Let’s Get Naked About Mental Health! Anyway…

I firmly decided not to have a Christmas. It was not a choice to be miserable, but just make it another day. There’s a podcast about it. In the podcast, I talk about my aversion to Christmas and how I need to work on it.

The Universe (God if you will), works in mysterious ways. Sometimes, it’s not so mysterious. It gives you a smack across the back of the head.

I’m still stranded in Tijuana. Long story. Tijuana celebrates Christmas differently. They ignore the song “Silent Night” and start setting off fireworks on Christmas Eve. In the US, think 4th of July on steroids.

The fireworks made me think of something and I reached out to Dani/Sole’s original owner who I had met on a few occasions.

Alyssa had come looking for Dani about a month after I adopted her. With me not speaking Spanish, and her not speaking English, I never got the entire story. It was a sad one, though, with Dani placed with her brother, then escaping, living on the streets, rescued by someone who could not take care of her, and then to me.

As soon as Dani saw her, she went crazy. The bond between Dani and Alyssa was apparent. Instantly. Love. I invited her to stop by any time. She did, then with her boyfriend, Allan, a few times. A fine young lady and a fine young man. It was supervised visits at first because, well, I am from Philly and I have been around the block a few times. But there was something about Alyssa and the way that Dani reacted to her that made me trust her, want to trust her. The supervised visits went to unsupervised and they took her for walks and Dani even spent the night once in the house they had rented.

Alyssa has been following me on Facebook and I mentioned in the text that I would be leaving any day and that she was more than welcome to stop by any time.

She replied to come over and enjoy Christmas Eve with her and her family. I had the urge, but the car was still packed, it was late, and I had just taken my nightly pills. There was also the push/pull of my feelings about Christmas. It’s just another day. Nothing to celebrate. Only something to endure.

I replied that I couldn’t possibly, but thank you.

She replied, “then tomorrow.” After I was in bed.

Christmas Day. Sipping my coffee. Just another day. Alyssa texted me again. That’s about when the Universe slapped me across the back of the head. Harder this time.

As I have mentioned in my podcasts, and seem to have forgotten, each morning we are given a choice: to continue on in our rut or take a chance to be happy. It is so much easier to continue on in our rut, follow the path of least resistance. It can be extremely difficult to take a chance. There was the packed car I would have to unpack, the altering of my routine, the trouble of getting Dani into the car, the fear of how she would react to a house full of people, and, really, the fear of bumping and mingling with my aversion to Christmas that I talk about in my podcast.

If you read/listen to my podcast “The Christmas Special,” you’ll know more.

I’m slowly learning to ignore the baggage that surrounds me, layers me, and follow my gut…and the slaps by the Universe.

I finally texted a reply to Alyssa: “Okay, let me empty my car and take a shower.” Dani and I made the 15 minute drive.

Alyssa and Allan were waiting for us as we pulled up. Dani went crazy and it took the three of us to unhook her from inside the car–I keep her leashed inside to keep her from jumping into the front seat and my lap.

The family adopted me as soon as I walked in the door. Before I was even there. Alyssa had texted me I was family.

I was home. The couple, parents, an uncle, young kids and even a grandmother that reminded me of my own and I received a hug and a kiss. Dani was excited and happy, the vicious beast was climbing into people’s laps to give kisses and get pet. She can be very over protective, but she loves to be loved. She knew she did not have to protect me from these people. She knew that she was safe and that I was safe.

I had a fantastic Christmas with people that I barely know, that are family. I struggled against the embarrassment at times as they would not allow me to do anything, getting my drinks and food. I laughed with the family, and especially the uncle and father. There was a discussion at one point about hairy chests.

Hairy chests is just one example. They were having fun. Allan was translating. They started showing off their hairy or non hairy chests. The layers of baggage that I had wrapped around me screamed to smile but not join in. I told it to “piss off” and lifted my shirt to reveal the hairiest chest to a round of laughter.

At one point, I had to leave. I was exhausted. I have not been doing much and the food, exercise, and two drinks were getting to me. I needed a nap. I made my good byes, with them insisting I return after my nap. They did not believe me, I think, when I said I would.

It was much, much easier to shrug off the baggage and hesitation after my nap and coffee. I went prepared with a cup of coffee for after the drink and the food to stay a bit longer. Everybody, including Dani, was starting to nod off so I said my good byes again. I was offered a place to sleep, a ride home, anything. I was good. I wanted to return home and just be happy.

It really does come down to choice, acceptance, and learning lessons. That was my Christmas present from the Universe: a lesson.

It’s not the pony I still want, but a damn good present all the same.