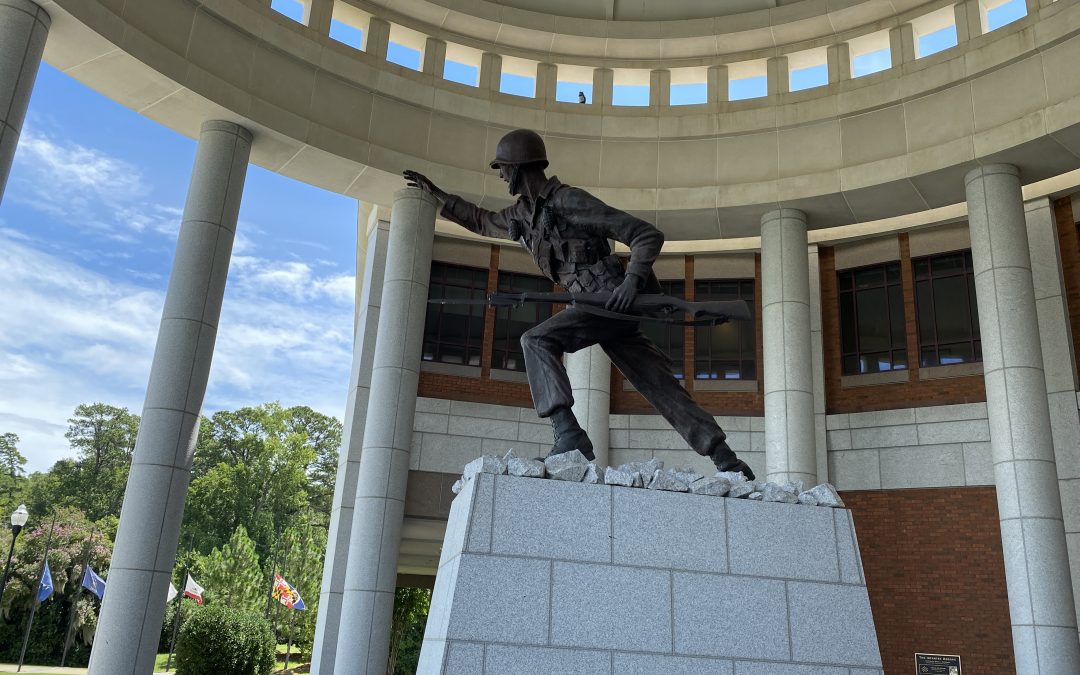 I thought I was following the ghost of a young man. As I wandered the empty museum grounds, I felt like the ghost.

Like everywhere else, Ft. Benning and the museum were closed. I stood underneath the sculpture in the entryway and wondered what I was doing there. The home of the infantry. Home. A great sadness welled up inside of me underneath that statue and I was close to tears in the shade of the Georgia sun.

I can’t describe it. The sadness was very much for the ghost of the present. Not the past. Not the regrets. Just…something. I need to consider it more, allow it to ferment and take shape before I can describe it better. Learn it’s texture and taste, it’s smell and see the entire field for what it is.

I was 17 when I enlisted. I was living in Maryland at the time, attending Rockville High School for my junior year. I’m still not sure why I walked into the recruiters office. Me, with my issues with authority. People took bets on how quick I would be kicked out for not being able to keep my mouth shut. But I signed on the dotted line and took the asphab test, scoring almost a perfect score, offered any job training. I chose infantry.

“Are you sure about that,” the recruiting sergeant asked. He handed me the thick MOS book, the book that listed all of the jobs I could pick from. I pushed it back. “I’m sure. Special forces. Airborne.” So I was assigned to 1st Special Forces group Airborne out of Ft. Meade, MD.

I was in Maryland again, during my bouncy days, years. Bouncing between Philly and Maryland when my mom got sick or I ran away. My aunt and uncle always took me in in Maryland. I was going to settle down. Stop running. Stop bouncing. I committed to something larger than myself. So, in June of 1988, the night after seeing the Monsters of Rock concert in DC, the recruiter showed up at my door saying I was invited to Ft. Benning. That day. I left.

I really wanted to go on base but it was closed due to Covid. I was part of the last training battalion to go through Harmony Church, barracks that had been built in the 1950’s, no AC, and would be torn down after I left. I think the story of boot camp is unimportant. I don’t know why. All summer long in full fatigues doing lots of push ups because I was a smartass. No, walking in the sun and heat still doesn’t bother me at all.

I finished at the end of August and took a plane back to DC. My uncle alone picked me up at the airport. Nothing had been said or written but I was informed on the car ride to the house that I wold be moving back up to Philly. I just accepted it as a matter of life. I packed up my stuff, again, along with my new fatigues, and drove the 2 1/2 hours a couple days later, past Ft. Meade, knowing I would never see the inside of it. After moving back to Philly, I transferred to 1/315th Mechanized Infantry Battalion located in North Philly. Years, decades later I would realize the car I bought could have just as easily brought me to Ft. Meade.

Summer of 1989, I was back at Ft. Benning to complete my advanced training. Again, not much maters. It was hot, I marched. I did well, even though I did even more push ups for being an even bigger smart ass with the West Point Cadets that arrived to help with training as they were being trained. Brand new barracks. Air conditioned. Shower stalls and toilet stalls. Luxury. Earning the baby blue chord of the Infantryman. I arrived home in Philly and continued my one weekend a month, being promoted to the rank of corporal around my 19th birthday. In 1991, I was accepted to the University of Miami and invited to go to Iraq. I chose Miami.

That was the end of my infantry career. When I arrived in Miami, counting on the monthly paycheck to pay for my new car, I was told no reserve until would take me in and I was transferred to Inactive Ready Reserve. No paycheck. No Montgomery GI bill to help with tuition. I would eventually quit school in the spring an drive back to MD, wondering what the hell I had just done. Where the welcome was cold. So I continued my way up to Philly, where I moved into my Coci’s house in SW, going to work for my cousin and a mason who urged me to go back to school each day after kicking my ass every day. I lost my car, giving it up. I went back to Miami in the fall to the surprise of everybody there.

Standing underneath the statue. I did my 22 push ups as a Facebook challenge. 22 push ups for 22 days to raise awareness for the 22 vets that commit suicide each day, about 5-6x above the national average for the non vet population. Empty and alone and I felt like a ghost as I anted to area, the parade grounds and through the monuments at the Home of the Infantry.

“Follow Me” is the motto of the infantry. Where should I follow? Where should I have followed?  Hindsight is not 20/20. It was a blurry vision that day, like seeing someone through a cloudy window with the sunlight behind you. Distorted and ghost like.

I know that I wanted a home.

Home is where you hang your hat? I think a soldier’s cap looked pretty damn good on me, felt pretty damn good. I looked into it, actually. Maximum age to reenlist is 35. 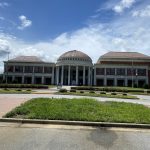 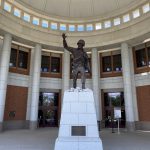 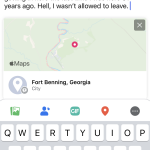 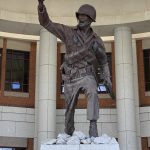 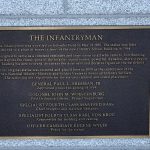 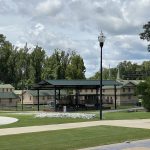 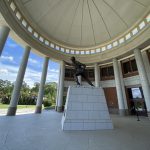 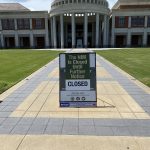 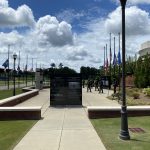 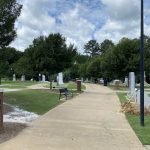 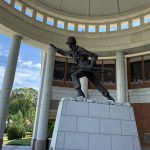 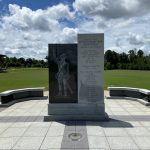 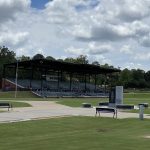 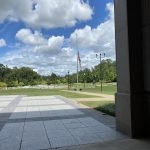 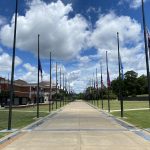 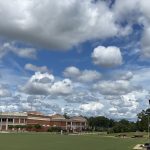 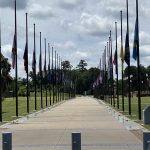 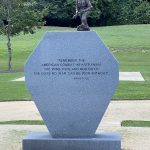 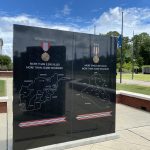 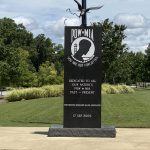 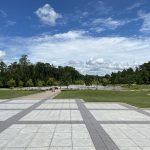