Murphy’s Law: Everything that can go wrong will go wrong–at the worst possible time. At the very top of my “things to do” checklist is to hunt Murphy down and beat the living shit out of him. I’ll chase his ass through New England, the Badlands, Texas, and all the way up to Alaska.

Murphy and I have an old relationship. He hates me and I hate him back. Today is a perfect example. I was going to post a nice pretty picture of the final work I had done on my pond, just a little bit more stone work to hide/cover the tub. It was actually cheap! (FYI: “Cheap” and “ponds” do NOT go together.) Just a few pieces of slate, some river rock and a couple of water plants. I went outside to take the picture and found the pump went. That’s going to cost another $1,000.

So my checklists tend to be more in the range of “don’t impulse buy hams.” What the hell is the point of preparing anything else? I wing it. It’s worked out pretty well for 49 years so why stop a good thing? It’s not like any preparations I make will get past Murphy.

But the items are starting to arrive. The Drive Canada book, the SUV air mattress, and the Yeti Cooler that fits my bottles of coffee creamer really well. I’m just waiting on the sleeping bag, the window nets, and the AC adapter. Yes: the coffee maker and grinder are coming with me.

But there are other things to do and prepare. What to name my car? This is a difficult one as I’ve never named a car. I’m lousy at naming anything. All of the characters in my short stories are named after people I know. But a car needs a name for an epic adventure to hunt down Murphy and find a decent cup of coffee.

Then there are the playlists to consider. I’ll be working on that over the next couple of days. You have to start a journey with the right song.

For years, as I made the trek back and forth from Miami, from cassette tape to CD, it was the first three songs of Damn Yankees: Coming of Age, Bad Reputation and Runaway. Then I’d go fumbling through cassettes or CD’s, spilling coffee, burning something or another (usually me) with a lit cigarette, as I found “next.”

Damn Yankees has to be somewhere in there. But not at the start. “Stompa” by Serena Ryder? Good choice but I don’t think so. Sting’s “Stolen Car (Take me Dancing)” is really appropriate but only for a nighttime start. If you go by top plays, it’s “Be Good” by Hothouse Flowers followed by “Renegades” by X Ambassadors.

If I just hit “play” I think I have enough songs for a month or two of driving. But then there is the Murphy thing. Yep, that’s the song I have to begin with: Warren Zevon’s “Lawyers, Guns and Money.”

It’s the perfect start. One, two, three…then the bass and drum charge intro! “Send lawyers, guns and money: the shit has hit the fan.”

Next on the checklist is sponsors. For the webpage that doesn’t exist yet. This is a tough one as who really wants to sponsor this misadventure? I did reach out to KOA Coffee Plantation. About 20 times. Haven’t heard back. I’ll still drink their coffee.

I did try to promote a company once that I thought highly of. The owner was pretty quick to ask me to remove all mention of her and her company as “my tone did not fit well with her clientele.”

So who wants me? I’m thinking of people and companies that might like me that I like. Until they tell me to please remove all mention of them and their companies. It’s not like they’ll be able to have their lawyers send cease and desist letters.

Faust Orthodontics in Havertown. Best orthodontist I worked with and he won’t screw you like so many do. And I think he appreciates my sense of humor?

Turpin Landscaping. I like Kyle. He’s hooking me up with the pond work. And he’ll be installing the new pump. He also fixed my pond after I broke it. I like him because I have absolutely no sense of style or décor so I can just say “whatever you think is best” and he comes up with something amazing, far better than anything I had in mind.

I think Vannucci Ltd at www.vannucciltd.com, handcrafted, modern bohemian (whatever the hell that means) jewelry? She’s an annoying pain in the ass to me, but I like her and she does make pretty jewelry and made me my “Live Aloha” mask. –and this is my why I am asked to remove all mention of people and their companies.

But then we can get away from checklists, and that all that other crap I won’t pay attention to anyway. I will not impulse buy a ham on the road. Though I might return with a pet pig?

I have a secret. It’s well known that Murphy f***ing hates me and I f***ing hate him back. A little known fact is I think his baby sister has a crush on me and gives me a kiss from time to time. I don’t know her name, and I don’t know what her law is (maybe it will become a column at some point), but I do know that it is about the simple, the extraordinary, that first blush of a miracle.

It’s about a kinder and gentler universe, a presence that says, “You can kick my brother’s teeth in when you find him, but until you catch up with him, here’s a kiss and something to remind you of possibilities.”

The stories always begin the same way. With a kiss (metaphorical), a smile, and the question “how the hell did that happen?”

It’s about the loose flimsy strings of thought in the universe that connects everything and brings everything together into a whole. It’s about finding a piece of jewelry in a state park and just knowing who it belongs to and returning it to them. It’s about cousins meeting for the first time and making me smile by jointly flipping me the bird. It’s about the chance encounters and the moments of clarity, of finding the extraordinary and the sublime.

It’s about knowing that I am lucky as hell. Even as Murphy sucker punches me.

And she will find me from time to time. 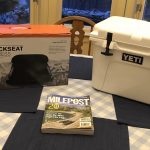 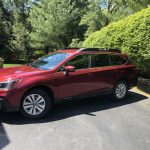