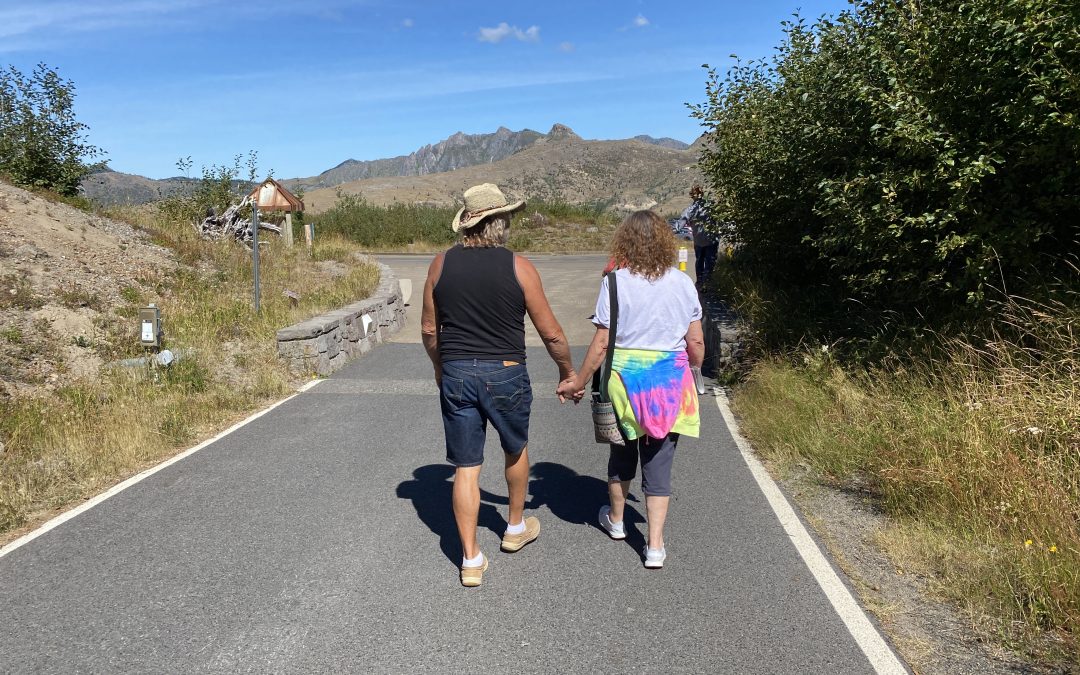 Okay, so I am cheating. The featured image is one I took today and I’m still a few columns behind. But it fits. It’s something I’ve seen a lot of during my travels. People holding hands. It’s not easy being a solo traveler and especially so during Covid. When it hit, we not only retreated into Covid Hibernation but also our Covid Bubbles. My step father has his neighbors and his Social Distancing Group. Friends cozied up with their families and couples expanded it to small groups of friends. I think my Pop is doing the exact same things he has always done?

Elbow and fist bumps just don’t cut it. I’m a natural hugger. I’m a talker and explorer. I enjoy just striking up conversations with random people. I still do. I still try at least. But physical distancing makes it tough, as well as the ever present threat of Covid. Strangers tend to remain strangers nowadays. Christine just slayed me when she cut my hair–she’s a natural hugger too. I almost flew back just to get that desperately needed haircut.

And that’s why I almost got tazed in Portland. How much of a wallop do those things pack? Is it any worse than what I did to myself trying to do electrical work? I almost found out.

When a friend texted me that her sister was doing an outdoor art show in Portland, I was excited to meet her. I didn’t even know she existed. Portland has an open air fair every Saturday and Sunday on the waterfront. They are slowly starting to open it back up. This was Erin’s first time there since it closed for Covid. Everybody in Portland is really surprised by everybody else’s surprise that the entire city is not burning down.

I finally made it there. I’ve always said that Dallas is the absolute worst for GPS. They lost their #1 spot to Portland. I swear my GPS stuttered! It did! There are just so many roads on top of roads and and a dozen different ways to get anywhere. A street looks like an on ramp and an on ramp looks like a street. I got rerouted a half dozen times. I finally made it to the waterfront, though, and nothing was burning down. There was a very nice open air fair going on. Everybody had masks and were maintaining their distance. I masked up and found Erin.

Interesting art. Somebody to talk to! She quit all of her jobs about a year and a half ago and started doing art, like her sister, full time. I don’t know anything about art, but I liked it. She has a huge range, from the fun and irreverent to some really unique stuff. She has a thing for buffaloes, “almost mystical creatures” she told me. She also shares a certain quality with her sister, Justine. There is just an adorableness and presence about her that as soon as I was near, I just wanted to hug her. A great, big bear hug. Which may have gotten me tazzed–you just really don’t know what women are packing these days. 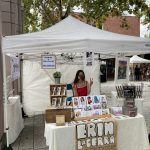 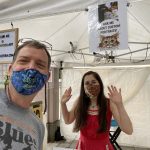 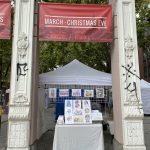 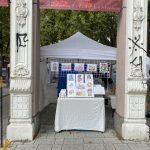 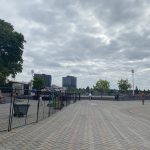 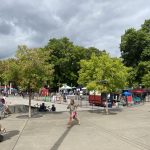 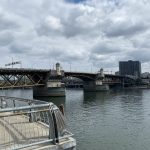 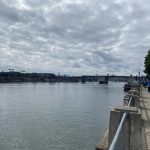 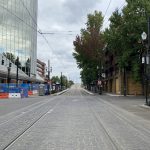 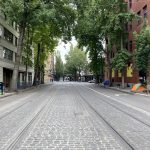 But there is that whole Covid thing so I kept myself in check. But did I mention www.erinlacerra.com? Maybe if enough sales come her way, I’ll get that hug the next time around?

That evening, I got another treat. From a friend’s sister I had no idea existed to a cousin I never knew existed. Yes west coast: there is another Gajewski out here. There was some debate on Facebook on what level of cousin he is, but he’s my grandfather’s brother’s grandson. Charles is about my age and I liked him immediately. He was wearing a Led Zeppelin shirt. Then, another treat: he’s also a gear head, has an awesome Challenger, and took me for a ride on those Oregon twisty roads the right way.

I had this big plate of Polish food for lunch at the waterfront and then some equally good German fare at a place Charles took me to. And of course the flight of beers. Aye, I wasn’t driving for once.

But it was nice to just talk. It’s small world. I already passed his parents in Tennessee and his sister in Denver. He had lived in Memphis but eventually made his way out to Oregon. We talked family, music (he’s a metal head with way more knowledge that me) and he was telling me about his car driving group. His bubble I guess. 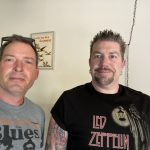 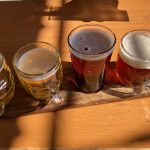 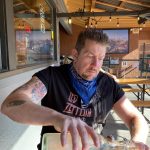 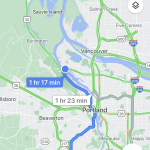 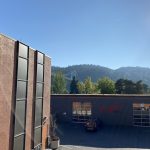 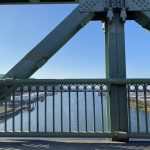 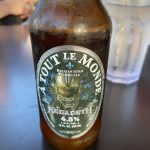 Portland is a bustling town. People doing what people do. The things everybody hears about is only happening at night in a certain area of downtown. Charles told me it’s a shame because downtown was really nice. On the flip side of things, he also told me I was being spoiled. The minor traffic I was running into was nothing compared to what it usually is. That 30 minute drive I took to Northeast Portland could take hours.

But then I went back to my hotel room, back inside my personal bubble, to get some work done. Tigard, where I am staying, is also home to a friend and fellow lab owner, Lance. It was voted unanimously for him to replace me as the president of the association. I took it as far as I could, from founding it to here. Now, I am helping with the transfer and some projects Lance has going. Th AOLP v2.0 will be appearing soon. He has much better managerial skills than I do –and tact– so I think my vision will be perfectly fine in his hands.

My bubble still has some bouncing to do before it can expand again. Until then?