All About the Smoke 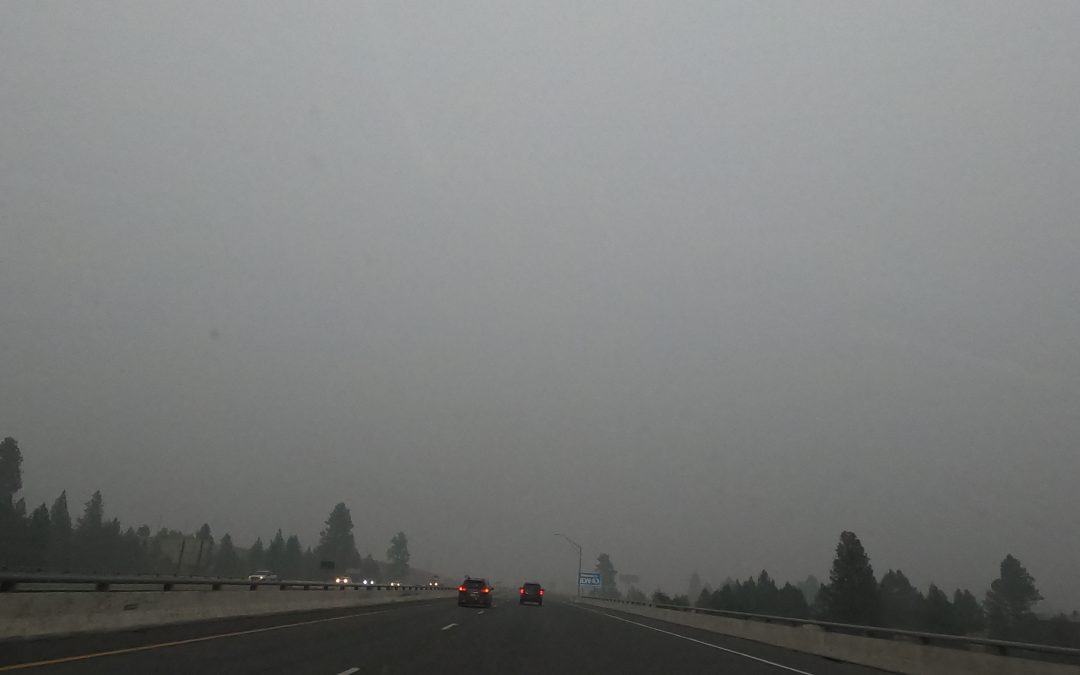 Just the one picture today and it is not even a new one. I stole the picture for this post from yesterday’s pictures. Smoke is all that you see. When I woke up this morning, there was even ash falling on my car. Unless you are here, experiencing it, you just can’t comprehend. But when smoking in my car with the windows up is healthier than not smoking with the windows down, you know it is bad.

People are jumping on the numbers. Air quality is based upon a 0-500 system, with 0 being the best. Some parts of Oregon were 500+, off the charts. Portland is around 490. Seattle a bit better at 425. Post Falls, Idaho, where I was and right next to Spokane, Washington, was in the high 400’s.

People were gathered around the television watching like they do in Colorado for fires and Florida for hurricanes. It wasn’t expected to get any better. After my sulk in Sumas, Washington, the drive to Idaho was really to get away from the smoke. Maybe that’s what has been affecting my sleep since I arrived on the west coast? It is just depressing, that ever constant blanket of smoke on everything, the constant smell of being close to a bonfire, everybody coughing and it just being generally unhealthy staying outside.

It wasn’t looking any better for me. The smoke is being pushed east by high and low pressure systems. I don’t think I would have been able to get ahead of it. I just heard from a friend that they are talking about smoke in the air outside of Philadelphia. And I WAS NOT going to Vegas–the only place in the country that seems not to be affected.

The title for yesterday’s post is “Canada: Denied!” That was my second choice. The first choice just struck me as being too negative. “Where is the Reset Button?” It was a pretty awful day as days go, but there were enough positives to balance it a bit. And then I started thinking of whales. Orcas, but whales in general, are very indecisive. The pod we were watching were going along in a certain direction for quite some time. After a deep dive, they came up in a completely unexpected place going in a different direction.

Mentally, standing outside of the hotel, watching ash fall on my car, I was stuck. Confused. The Canadian border thing bothered me. The smoke filled pictures bothered me. Not being able to go on even one hike bothered me. The fact that I was driving into what seemed like an unknowable amount of days in smoke bothered me. It all made my teeth itch.

Then it hit me: why couldn’t I hit the reset button?

Most times in life, you can’t. There are thousands of times I wanted to. I had resigned myself to the fact of driving through smoke, eventually making my way to a major airport like Chicago, and then flying to Alaska. Why not just drive back the four hours to Seattle?

And that’s exactly what I did. I had lunch with another future potential employer, an owner of huge dental lab who would like an ortho department. I had met him and his wife at a conference in January. They were sort of expecting me, like many people. I learned early on not to give exact dates. Among other discussions, they told me about their trips to Alaska. Everybody was telling me about their trips to Alaska. He mentioned the smoke might not be bad after I made it past the Rockies, but that’s not what the weather maps said. He also mentioned that it was only a four hour drive back to Seattle. I hit “reset.”

In a few hundred miles along smoke filled Interstate 90, and 4 1/2 hours, I was back at the hotel I had stayed at in Bellevue. They remembered me. I checked in, stashed my stuff in the room, and got to work. I get my Alaskan mandated Covid test tomorrow and then fly out on Wednesday. I got a hotel for the first four nights just north of Anchorage and will wing it for Fairbanks. All I need now is a car.

The hope is that the weather will change in the next 10 days. And something is calling me to Alaska.

But, then, something is also nudging me. “A solo, outward journey,” I wrote for my website, “necessitates and inward journey.” Layers upon layers. Why am I out here? There is the upper layer, the surface layer I share with everybody. It is based upon what Steinbeck wrote about in “Travels with Charley,” about needing a destination, a purpose. I want to see the other states I haven’t seen yet, even if it is just brief glimpses of some like Arkansas, or just along the highway like Mississippi. I wanted to share that with everybody while I took my notes chronicling this most unprecedented year in America. It gives me destinations. It gives me a purpose.

But then I dive deeper. The inward journey always had a destination and a purpose, needing no artificial construct like Steinbeck’s book. I went to find teachers. And see if I could find some things in myself that I desperately needed. I wrote in a column a way back that staying in motion helped. Staying in motion was necessary. I have found things in that motion that I think I could bring back with me to be at rest. Paths to travel in both the worlds that I have always known, finding myself too much in this one, the world of an orthodontic lab owner.

I lost balance decades ago. I lost clarity. I don’t know if I’ll find more pieces in Alaska, but I think so. And in Wyoming, Montana, South Dakota and Wisconsin. Kansas, Nebraska and Michigan are just part of my OCD at this demanding all 50 states be visited.

But on to state number 32 for the current journey (bringing the lifetime total to 42). With the test, ticket and hotel reservation all set, the only thing bothering me is do I add air miles to the total count on my homepage? After I get back, do I bump it up by google’s 2,870 round trip?